New cd, Wake the Sigh, is out!  This album features rarely heard guitar music from the 19th century by Domett, Piston, Fondard, Panormo Huerta, de Goñi, Pratten, and Giuliani-Guglielmi.  You can order a hard copy here or visit emmarush.bandcamp.com to purchase a digital album. 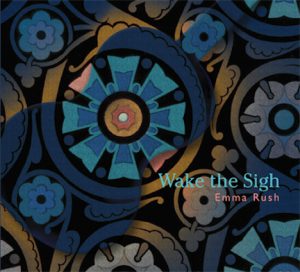 Wake the Sigh is a selection of lesser-known works from the 19th century that encompasses repertoire for both accomplished amateur guitarists and professional players.

Emilia Giuliani-Guglielmi (1813-1850) is perhaps the best-known of the composers featured in this recording.  Those familiar with the standard guitar repertoire will surely know the name of her illustrious father Mauro Giuliani, one of the great guitar composers and performers of the 19th century.  Giuliani-Guglielmi was herself a very accomplished performer and contemporary reviews praise her technique.  Giuliani-Guglielmi left behind many mysteries that have yet to be unraveled, such as her exact birth date, her mother’s identity, how she spent her early years, and even information about her adult life is sparse. She performed throughout Europe, once sharing  the stage with the pianist Franz Liszt.  Her career ended in Hungary, where she had moved with her husband Luigi Guglielmi, a composer and vocal instructor.  Her works include many sets of variations including six Belliniana – perhaps inspired by her father’s set of Rossiniana.  We also have a wonderful set of six preludes.  There is a large gap in the opus numbers of her published works, so perhaps there are further pieces waiting to be discovered.  This recording includes the sparkling Variazioni sopra il tema “Non più mesta accanto al foco,” a famous tune from Rossini’s La Cenerentola and the highly virtuosic Variazioni sopra un tema del Mo. Mercadante which has been in continuous publication since it was first issued.

The name Panormo is a famous one in the guitar world.  The Panormo family was involved in instrument making, performing, publishing, and composing.  Angiolina Panormo Huerta (1811-1900) was the daughter of Louis Panormo , the premier maker of Spanish guitars based in London in the 1800s. She was not primarily known as a guitarist, rather as a singer and pianist.  “Madame Huerta is a brilliant pianist, with an agile finger, and considerable mettle for the accomplishment of what she undertakes…” (The Musical World, 17(1842):132).  However, she was completely connected to the guitar world.  Beyond her family connections, she was the 2nd wife of Antoine Trinidad Huerta – an important and controversial figure in the guitar world, who she married in 1828.   It is unclear how long the two were married, but A.T. Huerta was married to his 3rd wife by 1848.  Angiolina Huerta used that name until her death.

We have examples of popular songs arranged for guitar and voice by Huerta, but the Andante and Allegretto featured on this album is her only known solo guitar work.  While modest in length, it is absolutely packed with delightful musical moments.

Madame Sidney Pratten  (1824-1895) is a true gem of the 19th century guitar world.  Born Catharina Josepha Pelzer in Mülheim in Germany, she moved with her family to England in 1829.  She was a child prodigy and concertized from a young age, sometimes with another wunderkind well known in the guitar world, Giulio Regondi.   She received her guitar instruction from her father, Ferdinand Pelzer, who was the founder of the guitar magazine The Giulianiad.  As her career developed she performed less and became a sought-after teacher and popular composer.  Her students included Ernest Shand, the afficionado Dr. Walter Leckie, and many high-society figures including a daughter of Queen Victoria.  She wrote and published an excellent guitar method, and a further simplified method.  As a composer she was prolific.  She wrote a great number of virtuosic concert works, produced a huge body of pieces in E major tuning, wrote arrangements of folk music from around the world, and much more. Today her most well known repertoire is smaller character pieces as suited the taste of the time.  Some of the most famous were written after the death of her husband, flutist Robert Sidney Pratten, whom she mourned the rest of her life after his untimely passing.  These pieces, with names like Sadness and Forgotten, show a great understanding of the guitar and of musical gesture.  Pratten was able to express a depth of emotion in a very sophisticated way in a compact form that didn’t require the highest skill level in the performer.  The Fairy Sketches and Kelpie’s Dance in this recording are inspired by folklore and demonstrate Pratten’s easy command of the instrument and characteristic musical language.

Susan Domett (1826-1911) was a British composer active in the 1840s.  She published works for piano, including Souvenir de Cheltenham, a set of four waltzes.  Reviews of her piano works published in 1846 mention that she is a young composer of great promise.  She would have been 20 at the time.  The Two Original Polkas presented here are her only known guitar works.  They are dedicated to her student, the Countess Fanny de Persano.  Of her Souvenir it was written “Simplicity and neatness are the characteristics” and this is an apt description of these light and lively polkas. (The Musical World, 22(1847):757) While the pieces are musically uncomplicated, they would have offered some technical challenges for amateur players.

Julie Fondard  (1819-1864?) was a student of Fernando Sor, likely studying with him in Paris, where much of her career was based.  In 1834-6 she was active in Cheltenham, England as professor of guitar and published works during this time. She had an extensive catalogue of works including those for solo guitar, voice and guitar, and piano, of which only four works survive (two for guitar).  We can see that Fondard was ambitious.  In her notes for Variations sur la Ballade de la Fianceé de L’Opéra she mentions that she had distributed copies to prominent guitarists, showing that she intended her music to be played on the concert stage.  Deux Valses Suisses are presented here without the ad libitum cornet and cello accompaniment.

Julia Piston (ca.1800-1842) is a figure for whom biographical information is scarce.  She was professor of guitar in Paris in the 1820s and published a terrific amount of music.  She was very active in arranging music for voice and guitar, lyre, or harp and a few examples of solo guitar music are also available.  Included in this collection, Piston’s Variations sur L’air Vive Henri IV present the popular old French song followed by a moody series of variations.  Her other solo works are more narrow in scope and are for a lower-level performer.  This example builds a more complete picture of the skill Piston had in writing for the guitar.

We have far more information about Delores de Goñi (1813-1892), later known as Mrs. Knoop, and she is a fascinating figure.  Delores Esturias Navarres was born in Spain in 1813.  Nothing is known about her upbringing and guitar education.  In 1837 she married her first husband by the name of Goñi.  In the same year she is recorded as playing concerts in Paris under the name Madame Delores de Goñi.  She was active throughout Europe at this time.  In 1840 she moved to America where she was enthusiastically received.  Somewhere along the way, Señor de Goñi left the scene, and we find Madame de Goñi concertizing with the cellist Charles Knoop, who would become her second husband.  The impression she made is clear in this concert review comparing a performance of Moretti, Sor, and Huerta (three leading guitarists of the time) and Madame de Goñi:  “Mons. Soar, who has labored to produce this same imitation, gave us less satisfaction than the two others, in spite of his great reputation, as the first guitarist in Europe. But the other evening, when we heard Mad. de Goni for the first time, we were compelled to change our opinion. This lady has a peculiar art of drawing from her instrument the tones of the human voice. Her playing is a song of continuous sweetness, and executed in a style at once exquisite and dramatic. This lady, indeed, succeeds in what guitarists generally are almost afraid to attempt; and not only does she succeed in the department to which we have referred, but in the short pieces which are most natural on the guitar, her performance is, in every respect, charming“ (The New World (1843):607).

Madame de Goñi has another part in important American guitar history.  The first x-braced Martin guitar was made for de Goñi, and the model was named after her.

The Six Waltzes included in this collection were published in 1837 in London under her first married name.  This charming set is full of memorable melodies. The pieces are technically challenging and were certainly written with the accomplished guitarist in mind.  Many of de Goñi’s later works, written and published in America between 1847-66 under the name Mrs. Knoop, are available.  They seem to have been written for a different skill level and taste and are not as sophisticated as the Six Waltzes.

Online classical guitar library with tons of public domain scores including the works of Susan Domett.